How to Become Fearless: Use EFT As You Read Thrillers

I recommend that, if you want emotional freedom, you read David Baldacci’s thriller, The Whole Truth.

Now, before you object and say, ‘I never read thrillers,’ hold onto your hat and bear with me. See, I’m all about using whatever means are at my disposal to attain more emotional freedom. Including watching scary movies, thrillers, and war movies. You’ll see why by the middle of this article.

I know that not everyone is going to want to read a thriller – at least, not read it the same way I do. So here’s why I think it’s an important book, and how to use it for the purpose I’m talking about: becoming fearless.

Two things to do as you read

There are two main things to do while reading this book:

One, use your EFT (Emotional Freedom Techniques) anywhere and anytime you feel uncomfortable (see tapping points below).

Two, take really careful note how the protagonists in the book use the internet, the press and other media to manipulate the public. Very slick, very media savvy.

In this age of such ease in communication, I believe that all of us need to be super-aware of hype delivered in such a way as to appeal to the heart, ads and videos and communications that wind our emotions up in extreme favor or versus some common cause.

And it is just not doing you any good at all to hide your head in the sand anymore by being a computer or internet dinosaur. ‘What you don’t know won’t kill you’ is not longer a viable argument – if it ever was!

In this book, the ‘bad guys’ pretend to be ‘good guys’ by making a big deal of a Russian man who supposedly was beat up, lost his family and all the rest. In truth he was a well-paid actor in service to a group of men who wanted to set a world-domination thing.

In the book, people watched the video clip, were shocked and appalled, put it on their facebook sites, talked about it in chat rooms, emailed it around to friends and ‘concerned’ citizens, etc. The word went around the world in hours.

The important point is…

Down the line when the storm that brewed out of this one video clip gathered momentum and became a typhoon, only a couple people questioned the veracity of the whole thing.

I think it’s so important to stay connected to the heart AND our reason-asking continually, is it true? Does it make sense? What motivation is behind all this? Who what where and why?

In the story, people who do ask about the truth are punished to the extreme in service to making a good story. Who knows if it would happen that way in the ‘real’ world? I don’t. But it still doesn’t stop me from asking my own questions, rather than straight-out belief in what I see and read and hear.

When I was living in New Zealand years ago, I was turned on to EFT by one of my creative writing students. She’d taken about a 6-week hiatus, and came back a changed person. She’d been one of those people who, even if you glanced at her, would immediately start weeping, and she never looked comfortable in her own skin. When she came back, she was clean, well-dressed, hair attractively cut, a big smile on her face-wow! I asked her what she’d done, because I wanted some, too!

She told me about the site that had helped her learn EFT, and off I went. My life has never been the same since-thank goodness!

One of the things I discovered while I was first experimenting with EFT was how to use it during a movie for when I felt upset or uncomfortable with the scenes or the script.

I’d always been one of those people who’d sit through something I didn’t enjoy because I was embarrassed to get up in the middle and leave. I started practicing honoring myself by leaving when I felt uncomfortable or if the movie wasn’t as good as I thought it would be.

That felt great! And then I took it another step – instead of getting up and leaving, I’d sit through the upsetting stuff and use my EFT to neutralize the upsetting emotions. What a revelation that was!

I started going to ‘guy’ flicks-war movies, shoot-em-ups and martial arts movies, just to see where I’d get triggered by all the blood, violence and murder.

Because in any situation, I want to retain my equanimity and ability to be sane enough to make correct, intelligent choices instead of losing my head, freaking out and being scared out of my wits. Not that I plan to get myself into any war zones or fight scenes! But I *have* done dangerous things that sent my heart up into my throat and made my knees weak, so I wanted to be able to handle that in case I needed to.

So I used these movies to neutralize the emotional triggers that made me cringe and cry and react. Every time the movie would show a scene that, in the past would make me want to hide my eyes or make me walk out of the movie, I tapped and mentally did the EFT process.

Soon I got to the point where I could take in the movie and its ‘reality,’ while simultaneously knowing it was just a movie, and watching how the script was written, the scenes set up, the effects, characters, make-up, etc. My perspective widened considerably. I got to be distanced and dispassionate rather than triggered and engaged. I am now responsive rather than reactive.

At one point as I was sitting through my third viewing of Apocalypse Now, one of the most disorienting and disturbing movies I’ve seen about war, I heard a voice in my head saying, ‘you know, Angela, it’s only a movie. You’ve done enough now!’

I laughed out loud and left the theater. I laughed because Martin Sheen, who starred in the film, had had a heart attack during the filming, and his wife, who saw him freaking out on the stretcher as he was being air-vac’d out, said to him, ‘honey, it’s only a movie!’

Whether she meant it’s only a film they’re making and don’t get so heated up about it, or life is only a movie, we’ll never know. But nonetheless, he had a major cognitive shift and ‘got’ it that he needed to relax and let the Flow take over. I thought it was pretty funny I should hear that same message in my head!

How to retain a sense of YOU

Now as I read books about war or conspiracy theories or other so-called ‘real’ things or events, I can maintain a real sense of me, my place in the world, and know that I have choices I can make out of a sane, fearless yet intelligent place. I don’t get caught up in ‘oh-no-what-am-I-gonna-do’ BS. I no longer live my life through my fears and insecurities. I live it through my center, that place within that I had never really connected with enough to feel calm, relaxed and inspired all at once. 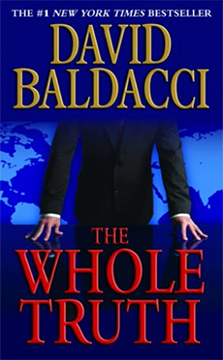 Of course it’s an ongoing journey to retain that place on an increasing scale.

Using EFT has helped me tremendously to stop being so depressed, so afraid, so angry, so sad-and so reactive about the world and ‘how it is!’ Oh me, when I think of the rages I got myself into about ‘how things are!’ Now I use all that energy that I used to use for fear and reaction for creativity and joy.

In short, I recommended David Baldacci’s thriller, The Whole Truth, as a fantastic tool with which to transform fears and anger and other stuck emotions, and as a great reflection of what’s possible in today’s fast-paced, interconnected world. It’s a good read, too! Get the book here: The Whole Truth

p.s. Take any scene from the book or any movie, and tap on it! “Even though all that blood makes me sick….even though I’m so afraid when I hear gunshots….even though life should be kinder….even though I’m afraid I’ll have bad dreams now….” You can learn how to do EFT for FREE here: EFTinEveryHome.com

Getting Emotional Freedom to Every Home on the Planet – for FREE