What Really Happened to the Signers of the Declaration of Independence? 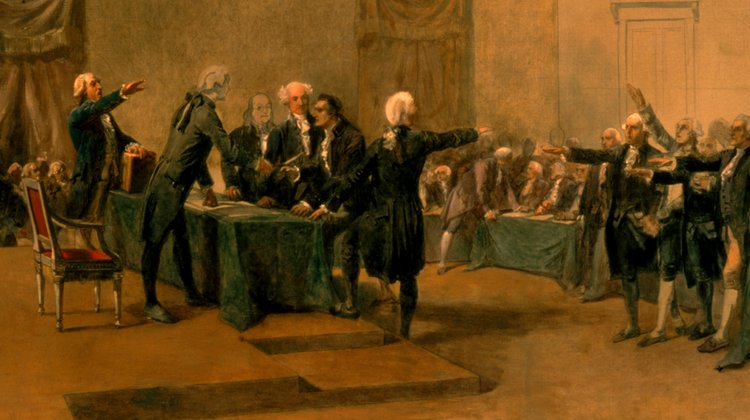 Have you ever wondered what happened to the 56 men who signed the Declaration of Independence? (This is from Larry James’ website, CelebrateLove.com.

For the record, here’s a portrait of the men who pledged “our lives, our fortunes and our sacred honor” for liberty many years ago.

Fifty-six men from each of the original 13 colonies signed the Declaration of Independence on July 4, 1776. Nine of the signers were immigrants, two were brothers and two were cousins. One was an orphan. The average age of a signer was 45. Benjamin Franklin was the oldest delegate at 70. The youngest was Thomas Lynch Jr. of South Carolina at 27.

18 of the signers were merchants or businessmen, 14 were farmers, and four were doctors. Twenty-two were lawyers – although William Hooper of North Carolina was “disbarred” when he spoke out against the king – and nine were judges. Stephen Hopkins had been governor of Rhode Island. 42 signers had served in their colonial legislatures.

John Witherspoon of New Jersey was the only active clergyman to attend. (Indeed, he wore his pontificals to the sessions.) Almost all were Protestants. Charles Carroll of Maryland was the lone Roman Catholic.

7 of the signers were educated at Harvard, 4 at Yale, four at William & Mary, and 3 at Princeton. Witherspoon was the president of Princeton, and George Wythe was a professor at William & Mary. His students included Declaration scribe, Thomas Jefferson.

17 signers fought in the American Revolution. Thomas Nelson was a colonel in the Second Virginia Regiment and then commanded Virginia military forces at the Battle of Yorktown. William Whipple served with the New Hampshire militia and was a commanding officer in the decisive Saratoga campaign. Oliver Wolcott led the Connecticut regiments sent for the defense of New York and commanded a brigade of militia that took part in the defeat of General Burgoyne. Caesar Rodney was a major general in the Delaware militia; John Hancock held the same rank in the Massachusetts militia.

Thomas McKean of Delaware wrote John Adams that he was “hunted like a fox by the enemy – compelled to remove my family five times in a few months.” Abraham Clark of New Jersey had 2 of his sons captured by the British during the war.

11 signers had their homes and property destroyed. Francis Lewis’s New York home was razed and his wife taken prisoner. John Hart’s farm and mills were destroyed when the British invaded New Jersey, and he died while fleeing capture. Carter Braxton and Nelson, both of Virginia, lent large sums of their personal fortunes to support the war effort but were never repaid.

Adams, Jefferson, and Carroll were the longest surviving signers. Adams and Jefferson both died on July 4, 1826, the 50th anniversary of the Declaration of Independence. Carroll was the last signer to die in 1832 at the age of 95.

Freedom often has a high cost: dedication, commitment, love, sacrifice, heart and more love, even your life. What are YOU willing to pay for your freedom? aloha – Angela

NOTE:  If you received an e-mail describing what “really” happened to the signers of the Declaration of Independence that describes their many tales of woe, don’t believe it!

The stories can be about “how the signers suffered” or “the price they paid” spiel contains numerous errors. (Click here for the full story that debunks the Internet e-mail hoax. Need more proof?  Click here.)

Sources: Robert Lincoln, Lives of the Presidents of the United States, with Biographical Notices of the Signers of the Declaration of Independence (Brattleboro Typographical Company, 1839); John and Katherine Bakeless, Signers of the Declaration (Boston: Houghton Mifflin, 1969); Biographical Directory of the United States Congress, 1774-1989 (Washington, D.C.: U.S. Government Printing Office, 1989).