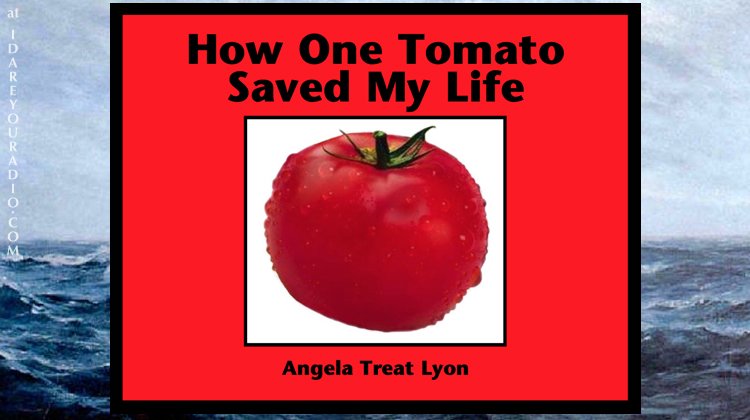 I knew I was dying.

It had been five days since I had eaten, and in that time, I’d only been able to keep the tiniest of licks of water down. Fasting wasn’t a problem. No water, however, was.

It was mid-August, 1984, and a week before, as a representative for the Kauai yachting association that held a certain trans-pacific race every two years, I had welcomed a father – son team who had come in second in the double-handed (only two people on the boat) race.

I helped them unboard, carry gear, trash, dirty laundry and empty supply containers up to the docking station where everyone was busily meeting, greeting and celebrating. They still had wobbly sea legs after two weeks on the water, so we went slowly on up to the club house. As soon as they were set, I went on down to the next boat that was just now pulling into the marina, never dreaming I’d be on that boat again soon….

On the muggy tropical awards night a couple days later, by chance I was placed next to Jerry, the father I had welcomed. His son had flown back to the mainland already. Jerry told me he was looking for a crew to sail his boat back to California with him.

Huh? I had a sales job in a gallery 6 days a week, and my kids were about to come back from visiting their dad to get ready for school – hello, Angela? My inner critic screamed, “how can you even think about going?”

I over-rode my inner critic. She was always trying to put a damper on everything! I decided right then and there that this was a trip of a lifetime and I wasn’t about to pass it up. So, since the sail would take 25 to 27 days, I got a month lay-off from my boss, handled the logistics for my kids and house. Two days later, Jerry and I set off.

I was excited and terrified.

I was a good sailor – I’d been sailing since before I was born, and was utterly comfortable on boats, on the water and in it. But I’d never sailed across an ocean!

I’d never experienced a minute of seasickness. But the second we left Nawiliwili Harbor, I almost passed out when waves of extreme nausea took over my entire world.

Jerry suggested I go below decks and rest a bit, but I wanted to see the ocean and the way the sun climbed the sky over my rapidly shrinking island home. I was OK if I stood up, but if I sat down, I was a mess. If only I’d had EFT!

Eventually I did lie down, because over the next three days the nausea got worse and worse. I could stand up and I could lie down, but sitting made my world a dizzy hell. I got tired really fast and couldn’t hold a thing down. On that first day, I lost every last fragment of anything in my belly in the most unpleasant ways.

By the morning of the fifth day…

I knew that I’d die of hypothermia if something didn’t change. I was lying in my bunk, fully dressed, with my down jacket on inside my down sleeping bag. I felt one minute like I was submerged in Arctic ice, the next in the fires of hell.

I kept wondering why me? What have I ever done to deserve this? How did an experienced sailor get seasick all of a sudden? How my brothers would tease me if they ever found out! Thoughts and feelings of anger, guilt, sadness, shame and grief swirled through my water-deprived and nutritionally unbalanced brain.

Jerry came below and said something that made no sense to me, and left shaking his head. I realized somehow that I must be delirious. I suddenly had a feeling that if I died out there in the middle of the ocean, now five days out from Kauai, he wouldn’t turn around and return my body to shore.

It was at that moment that I really got it that I had to make a sharply defined decision.

It was all about “WOULD I make it through?”

Would I make the decision, then and there, to do what it took, no matter what?

I decided that a tomato would be my savior.

I had done a lot of multiple-day fasting in my 20s, and each time I had had stewed tomatoes to break the fast. (I’ve been told that probably wasn’t the greatest ida, but since I no longer fast it’s not a problem anymore, is it?)

I pulled out the ripest tomato in our meager fresh veggie stores. It looked like life itself, embodied. It was plump and red, and smelled really good, but one thought of eating it and my poor wrecked stomach flipped over a few times.

I closed my eyes and said to my deepst self…

“You’re going to do this, and you’re going to live, so shut up about nausea anymore. Thank you.” And bit a tiny little hole in the skin.

Over the next couple of hours, I had to fight for each little drop of juice to stay down. At the end of three hours I could take a bite.

Finally, I had eaten the whole thing, and I knew – I KNEW – I’d be OK. I feel alseep and woke up in time to relieve Jerry for the midnight watch. From then on, I didn’t experience even a fraction of nausea or dizziness, and even took over the cooking.

In quantum physics, it is said that multiple realities exist simultaneously. I know you’ve heard that before. But until I was thinking lately about my experience sailing across to California so long ago, I couldn’t quite get what they meant when they talked about how the universe collapses into a reality.

Why use the word “collapse”?

I had a sudden vision of the scenes in the movie, “What the Bleep,” where all those bubbles of realities were floating around, each one with a choice of reality in it. I saw that once I made my choice to live, to keep that tomato at my mouth, to refuse to let my body vomit each succeeding drop of juice, all the other bubbles of reality had collapsed into the one I had chosen to experience.

It was a real leap of faith to choose to live – especially since over the next 22 days spent tacking across the wide Pacific, without seeing one other human being or boat anywhere, not even one single contrail above us, we got becalmed in the Doldrums, the engine broke down when we tried to motor out of them, a storm blew out our mainsail and I almost fell overboard retrieving it. And by the time we got to Santa Cruz, we were virtually on our last cup of water. I could have died in multiple other ways, but I was appalled to think I might die of nausea and hypothermia!

First, I’m a survivor. I want to LIVE.

Secondly and right on top of that, it was my sharply defined decision.

My question to you

At a time when the world seems like it has fallen apart, it’s a US election year, the economy is blitzed, real estate is about to blow up, people are terrified about their finances and livelihoods, and no one is sure about a damn thing:

What sharply defined decision are you going to make right now that will allow you to not just stay alive, but thrive, to your soul’s deepest satisfaction and fulfillment?

We all know how to survive. We’ve been doing it on one level or the other for our entire lives.

This moment is a choice moment at the beginning of our calendar year – are you going to do same-old, same-old?

Or are you going to allow yourself to release your humor, brilliance, intelligence, beauty, uniqueness and vitality full-tilt and non-stop?

It ain’t about goals, folks. It’s about how you feel.

Work on your goals, and the list of to-dos you want to complete – but – that will be there even if you never think of it again.

How you feel is critical

Maybe if I had felt like that on that fifth day out of Kauai, I might have been happy enough just to let go and die. But I doubt it! Too much fun to be had!

How do you want to feel about yourself, what you do, who you play and work with, your family, your body, your work, your finances, your fun?

How do you want to feel at the end of the day as you fall asleep?

Those are the only important choices.

Because when you go for those choices to the preference over other, less-fulfilling ones, people who feel the same way will align with you and sing the same song, paint the same reality picture, create the same feeling along with you. And it will expand and grow and become resplendent.

This is the power of alignment in the attraction game. But you have to BE attractive before you can attract. And you can’t be attractive until you feel good!

Then do one small thing that will help you feel that way.

I dare you to live your magnificent brilliance!

Live it as much as you can every single moment – even when that means being silent and in the background, or resting, or simply receiving – it’s not always about being out there and assertive.

And remember – the rest of us love it when you live your life feeling great! It gives us hope, inspiration, and real, live permission to do the same, ourselves.

Thank you for being part of my life. My best, deepest and warmest blessings for a fabulous, unhindered, open and completely delightful new year!

EFTBooks.com
The International Source for the best EFT Books